Another Step Closer to Reality I'm dusting off some vintage graphics for a vinyl box set of the early '80s NE recordings that's coming out shortly. When I say "graphics", I mean a lot of cut & pasted images snipped out of magazines and tatty black and white photocopies. It was progressive political pornography I was doing back then.

The original of this particular image was a collage clipped from the Sunday magazines then made into a dozen A3 photocopies,courtesy of a friend who had an office job with British Gas. It was used as a pull-out in Rock Wilson's Apocalypso A Go Go 'zine, and I also saw it recycled in the situationist-inspired 'zine Anti-Clockwise.

I never had access to Photoshop back in the day. Or should I say, “the means of production of this type of imagery was under much tighter control by the military industrial complex”? Or should I say Photoshop hadn't been invented yet?

Any which way, I never got to do this picture in colour before. It's nice to be able to re-shape monochromatic photocopies into something like how I imagined they should have looked.
Posted by --((()))--- at 06:37 1 comment: Links to this post

April 13 2008: The Cavern, Gandy Street, Exeter, UK with Dieter Muh and The Durds

I know its a long way away but for all you experimental/industrial fans heres something interesting: SUNDAY 13 APRIL - CAVERN - NOCTURNAL EMISSIONS + DIETER MUH Nocturnal Emissions, masterminded by Nigel Ayers and a handful of cohorts, has been investigating the complexities of the human psyche since the early '80s. In its earliest incarnation, Nocturnal Emissions created blistering collages of electronic noise infused with the anti-funk rhythms found in NE's postindustrial colleagues such as SPK, Coil, and Cabaret Voltaire. After a few dodgy attempts at New Wave, Ayers turned his attention to the alchemy of post-Eno ambience. Now, toiling away in his sonic laboratory in Cornwall, England, Ayers conjures delicate refractions of shimmering tones with cosmic touches of '70s electronic work from the likes of Cluster and Conrad Schnitzler. These influences can be readily heard on 1997's Sunspot Activity album, the aural equivalent to looking at the sun. Ayers didn't title any of the tracks on the album, so we've titled the selection presented here "II." While Ayers doesn't appear to be manipulating VLF static or the sferic whistles attributed to sunspots, he has fashioned a beautiful album that mirrors the sun's white hot ambience as it waxes and wanes in deep space. Deep sleepwalker ambient floes continue throughout the 1997 album Omphalos!, until "Arbor Low" slips into hyperdrive with an uptempo breakbeat skitter. Recently, on 2000's Future Antiquarianism, NE's shape-shifting sound has tentatively returned to the beat: drum and bass breaks emerge from the soothing ambient passages in a rather hypnotic take on that manic genre. www.earthlydelights.co.uk/
The Durds will be supporting this show with a special one-off performance by Dan Cray and installation artist Fliss Shillingford. Signed to Banazan Records in california The Durds like to make nasty, funky, folky pop songs and do not care whether they are done on computer, groovebox, Playstation or Spanish guitar. The Durds are desperation-fuelled electrofolk tied to a belief that pop can and should be about anything (this tends to mean the usual tortured artist fare such as violence, decay, illness and unrequited love/lust).
http://www.cavernclub.co.uk/listings.asp?monthID=4#listing3041
Posted by --((()))--- at 01:11 No comments: Links to this post I just found this site http://www.de-noted.com that is full of images of altered banknotes. So I had to show you this photo of this fiver, as it's got one of my songs written on it, "never give up".

And I'll post the best ones on the blog.

This flickery video is what you might call a "rush" based on some small assemblages I made in 1989. The original footage was shot on Super 8, (this lends organic saturated colours and texture, etc ). I put it through After Effects and some other digital programs this week. I intend to do some more work on this film later - but with it being 18 years in the making, I thought it might be nice to show it in its present state. 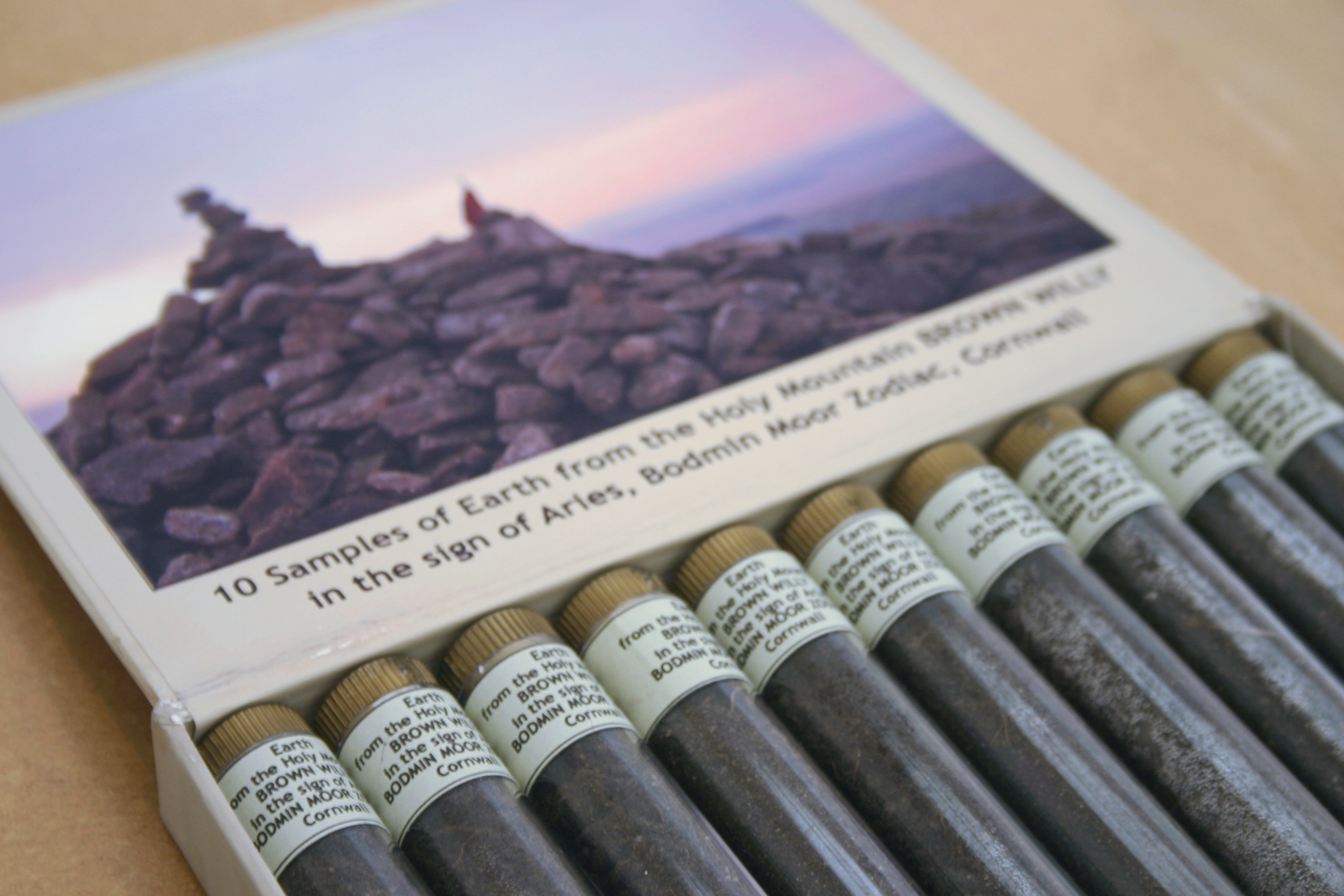 There is an aura of contemplation in the Upper Gallery of the Newlyn Art Gallery: an otherworldly sound gently resonates throughout the space, like a hi-tech Gregorian chant. Entering the space a noisy and ramshackle apparatus lurches into life, scanning the walls with a dangerous-looking green laser. The machinery is like a survivalist’s farm machine, built from bicycle parts and an electric drill, and powered by old car batteries.

The choral sound 'Aquarius', created by Nigel Ayers, is a generative audio work for eight stereo speakers. The piece apparently began as a 1972 recording of a Cornish male voice choir, singing the popular hit from the musical 'Hair'. It has been subjected to a digital process of exaggerated time-stretching and is now almost entirely unrecognisable.

The spinning laser is 'Wish We Weren’t Here' by Paul Chaney, used previously to create photographs in the landscape depicting the raised sea-levels resulting from global warming.

In 'Raising the Eathorne Stone', by Paul Chaney & Steve Patterson a small DVD player stands on a plinth, and in front of it is a simple A4 plastic display book. This contains a fascinating exchange of letters and emails between artists, mystics, farmers, engineers and archaeologists: documenting the process of discovery and re-erection of a standing stone in a field a few miles away the exhibition space. The DVD has been shot using the obsolete home-movie format of Super 8 film, this lends organic saturated colours and texture to the footage.

In 'Cornish Shrew Mysteries', also by Chaney, a snapshot is enlarged to a colossal size of a hand offering three dead baby shrews to the camera. The photograph is flanked by two small shelves. On each shelf the bodies of shrews are sensitively placed in makeshift shrines; one made from a bird’s nest and the other a tobacco tin lined with fresh flower petals. A small sketch drawn in faint pencil and smaller photographs on the wall describes the discovery of the dead shrews in corners of the artist’s smallholding.

Standing on another plinth is a small open cardboard box. Printed on the lid is a photograph of an arrangement of rocky cairns and a prayer flag on what looks like a Himalayan mountaintop. This is 'Holy Mountain' by Nigel Ayers, labelled as containing 10 Earth samples from the Holy Mountain Brown Willy, and the photograph was in fact taken on that same hilltop in North Cornwall. The black soil samples are contained in neatly labelled clear test tubes. The title reflects the influence of the visionary films of Alejandro Jodorowsky, whose feature film 'Holy Mountain' was released in 1973. The box can be interpreted as a alchemical cult relic or as a cigar box, referencing the use of cigars in voodoo ritual. It also mimics the format of boxed multiples, intended
as affordable artworks, made by members of the Fluxus movement in the 1960s.

Examining artists’ notebooks we see in their sketches, flashes of insight, which are subsequently realised in the form of painting or sculpture. In the case of Charles Darwin’s notebooks, these insight-flashes led him to formulate the theory of evolution. 'Darwin’s First Tree' by Rupert White grows from the floor and stretches up into the gallery skylights, its aluminium branches glinting in the sunlight. It is a three-dimensional reproduction of a sketch by Darwin in which he first made this diagram of the evolutionary tree of life, where species branch out into sub-species and new life forms emerge as nature grows in increasing complexity.

On the largest wall of the gallery is 'One a day' a series of drawings by Daryl Waller. When I visit, the artist is half way through his series of large ink and pastel drawings made in response to the exhibition. On the first an enlarged drawing of that day’s Western Morning News shouts NEW PUSH FOR GREEN ENERGY. The second re-styles a Roger Hilton drawing with the addition of fluorescent pound-shop stars, in the third DARK TIMES is corrected to ARK TIME as a bleeding figure lies draped over a table top.

Rupert White’s 'Magic Tree' dangles from a rafter. It is an enlarged copy of a car air-freshener cut from a piece of sterling board, a cheap type of builder’s board made from woodchips. On the tree hang a selection of original signed drawings and prints by well-known 20th century St Ives artists: Roger Hilton, Sven Berlin, Bryan Pearce, Alan Lowndes and Denis Mitchell. These are decorated with absurd images of middle-aged people clipped from naturist magazines. The tree is scented with a pungent chemical air-freshener. Hung in this irreverent manner, the St Ives pictures, which have a high value to collectors, take on a different meaning. The faux naivete (or authenticity) for which they are valued assumes a shocking freshness when seen in this context, and these aging drawings once again assume a radical beauty, in many ways mirroring the knowing humour of Daryl Waller’s work.

Nearby, droplets of water cling like glistening jewels to the inside of 'Still (condensation-cube)': a sculpture in which a simple process of condensation converts sea-water collected from Mounts Bay to drinking water. This work by Rupert White alludes both to the human instinct for survival, and to processes of spiritual transformation. 'Psilo' and 'Corporation-tree', two other large sculptures by the same artist rest in the adjacent space. The former is based on hallucinations that have been reported by people taking magic mushrooms, and the latter seems to refer to the artificial planting schemes of out-of-town retail parks.

On the last wall, is 'The Bodmin Moor Zodiac', 12 mysterious silver-framed images based on aerial photographs of areas of Bodmin Moor accompanied by a wood-framed vintage Ordinance Survey map showing the same images in situ. These ink-on-paper images, with the saturated colour of batiks, have been digitally-enhanced to highlight the Rorschach–like images of zodiac signs. This may be a colossal piece of Neolithic land art discovered by Nigel Ayers, or it may be an expression of an attempt to use diagrams, schematics, flow charts to link the real material world with the abstract world of thought and feeling.

Until now, psychogeography has been an urban concept. There is little precedent for the ideas of psychogeography applied to a rural setting like Cornwall and the content of the rural imagination. Most people coming into the Cornwall area are attracted to the experience of the coast. However, the art in this exhibition emphasises an interaction with the interior landscape, both literally in terms of inland areas and
metaphorically in terms of the recesses of the human mind.

In this work, there is shift of emphasis from the visual, to a holistic use of contemporary art tactics. The style is one that has become familiar in terms of sensationalistic Young British art, however the GreenCube artists are very clearly attempting to reclaim the tools of 1960s conceptualism, to charge their work with levels of meaning that have been lost in contemporary art marketing. The mood of the show is contemplative, yet punctuated with the shocks of the postmodern world. A powerful antidote to the globalisation of contemporary art, 'psycho/geography' was an exciting exhibition made by a group of emerging artists sharing a heightened awareness of their geographic and historical location in Cornwall.

psycho/geography was mentored by Steve Messam of FOLD and FRED, Cumbria