The British Art Show 7: In the Days of the Comet

Nigel Ayers casts a sceptical eye over The British Art Show (for artcornwall.org)

Up the marble staircase of the Plymouth City Museum and past all the natural history stuff and there’s bits of window frames on wheels that look like they’ve been salvaged from skips. It’s the British Art Show, but times are hard and the quality of found objects has dropped: so much for readymades, it’s cheaper to paint on canvas these days. 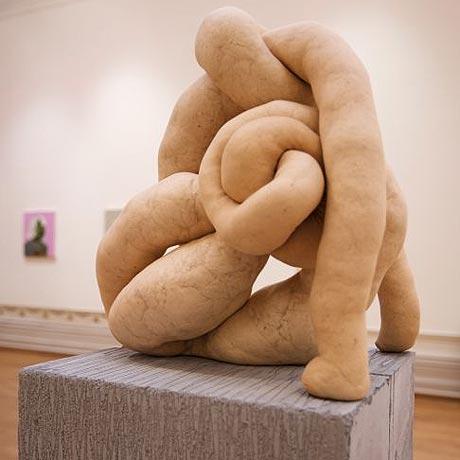 So we go into the gallery upstairs, and there are plain brown MDF oblong plinths, each with a pair of breezeblocks on them. On top are tights stuffed with kapok in a style typical of Sarah Lucas. And what I like is that they refer to the body in a very British way. We don’t have the same relationship with our bodies that they do in countries where people don’t giggle at nudists. These knotted tights, they are actually really good. Some critic mentioned an art-historical reference to Bellmer, but to me it’s more like Bill Brandt’s photos of arm-holes and folds of nude flesh that look like pebbles, and pebbles that look like tits and arses. Sarah Lucas rocks in the rock ‘n’ roll sense, not in the carved-in-stone sense.

Anyway, that stuff’s by the door. And you walk past it and there’s a load more old window frames that have been built up and made into a big tall kind of platform construction with some cushions on it. They remind me a bit of a 70's Habitat book I once had, where it was all platform beds, and bean bags and these little carpeted niches in the floor where you could do all your wife-swapping and drink Matteus Rose. In the handout it says its by Spartacus Chetwynd and that its influences include a load of things. Maybe I’ll look them up. Maybe I won’t bother...

There’s some paintings on the walls round the edges, but they don’t really register with me. There’s also some down the far end. They're a really dull colour of really boring scenes in Coventry: a football pitch beside council flats and graffitie’d walls. Places where nothing big and important ever happened, but where people live and kids grow up. I like these. The label says they're by George Shaw and they’re painted in Humbrol paint. Wow. I start doing mental calculations on how much all the little pots of paint must have cost. I’m thinking on hundreds and hundreds of those little pots you use for airfix kits in colours like British racing green and Pillarbox Red. Proper old fashioned colours you don’t get any more. 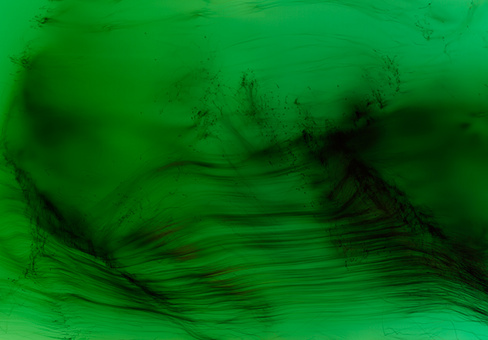 And on the right there’s a video playing and there’s some statue or something borrowed from another museum. And there’s a huge glass box with a life size mannequin in it and a stuffed lizard with two heads and a load of sand and tree branches. It's by Charles Avery and it looks a bit like props from Lord of the Rings.

At the Peninsula Arts Centre, Plymouth University across the road, the Brit Art art show continues. There are flimsy wooden trestle tables with magazine and newspaper cuttings under Perspex by Wolfgang Tilmans. The one image of all the dozens of images that sticks in my mind, like atrocities tend to, is one of two guys about to be publicly hanged in Iran for being gay. Makes you wonder what you can do about it. And there’s lots of other stuff about religious intolerance and the catholic church. And so this must be the research material Wolfgang Tillmanns has collected over the year. And what does he do with it? There’s a wall-sized digital print of green on green smears. Not my favourite colour. Not very well-mounted on the wall. I don’t get it. Is this abstract image a response to the horror? It’s sort of anti-humanistic, but wouldn’t exist without complex chemical processes and all that digital malarkey. And the way it hangs, you don’t really notice it.

And there’s a room that you can walk into through a curtain and it’s pitch black. It’s really black, not just subdued lighting. You bump into people but at least you can see the projection properly, for what it’s worth. There’s an old-school 16mm film loop running in a booth and some electronic sounds, and some images on a the screen but I can’t remember what they were. It could have been anything, whatever it was, I wasn’t taking notes at the time and I’ve forgotten. 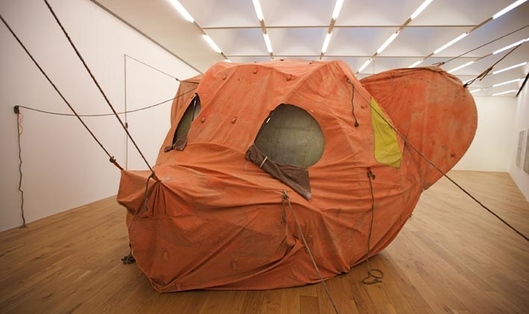 Then over at the Art school, they’ve got this huge head made out of old canvas tents hanging on ropes and tarpaulin with lots of little sew-on souvenir travel badges on it. And it looks like Mickey Mouse, except it’s a teddy bear head. Brian Griffiths. I like it, but I’m childish. It brings out the infantile in me. And it reminds me of going camping when I was a kid, when tents were tents, proper solid, heavy, canvas things, not the farty non-degradable things Milletts sell for festivals.

Onwards I trek, to the worst-named art space in the west of England, The Slaughterhouse. It’s a 40 minute walk out of the city centre, out past the Brittany Ferry port, past the army base with the marine on the gate holding a bloody big gun, to Prince William’s yard. They’ve got some installations set up that are all a bit boring. Matthew Darbyshire’s one’s like a gift shop anywhere. Down at the far end there’s one of Marclay’s turntables, with a transistor radio on it and a DVD player instant retro.

Then there this other really dark room, which, when your eyes eventually adjust you realise is a proper little cinema, with proper seating. They’re showing Christian Marclay’s "The Clock". So I stand and watch, while my eyes adjust. I don’t really like watching videos in galleries, but this one really starts to draw you in. It’s lots of short bits of film, clipped from films dating back maybe 80 years and more recent ones like The Big Lebowski and every so often there’s a close up of a clock or a watch. And after a few minutes I notice that all the clocks are at ten to four, so I’m wondering how many films are there where the clock is a ten to four. Is this some stock footage that got used over and over? 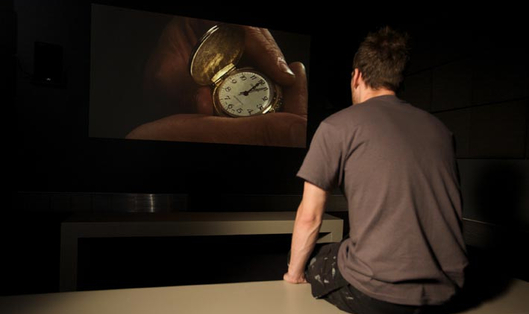 Then I look at my watch and my watch says ten to four. Then the clocks and watches in the film move to five to four, then it dawns on me it’s been edited to synch to real time and it’s 24 hours long. So I take a seat and watch for half an hour, even though I’m short of time and need to head back soon. I could have watched it for hours and hours. I might go back and do just that. The guy has done something new and relevant using materials that are around us all the time. But he’s used them in a new way. You couldn’t really do this kind of thing without digital editing, and there being an incredible number of films easily available everywhere. Anyway you get these bits of drama and rising tension, and suspense around revolving around this clock motif. It’s profound.

There’s another dark room and there’s a more narrative kind of film running, with actors in a pub, some sort of mildly surreal things going on. In the corner there’s an animatronic rubber head with rolling eyes constantly spewing out white liquid that’s pumped round and round. It's by Nathaniel Mellors and I like that too.

And that’s about it. 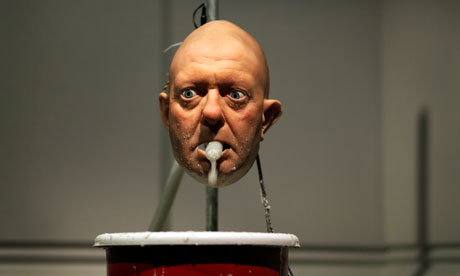 When I look at art like this, which has great deal of art historical precedents, I find myself thinking things like: who is this art for? Rich people? Academics? Why do the Hayward Gallery curators consider it important and British and relevant? Aren’t a lot of these artists just up their own arses in a big farty art bubble? They call it The British Art Show, but at least one of the best artists in it isn’t British and doesn’t live in Britain. And it’s nothing much at all to do with any comet, unless “Comet” means the electrical shop. A high percentage of the pieces in this show are, art historically self-referential hyper-specialized, dry, academic and incredibly pretentious. The references to other existing art is stifling. The painting styles are labored and dullsville.

The downside of this kind of art is you come away from it feeling very baffled and switched off. There isn’t a way into it without specialised knowledge. On the plus side, they’ve got this great thing going where the projections are in very, very dark rooms, without any of that health and safety nonsense. And you could while away a rainy day watching that Marclay film. And it’s free.

The Archer’s stars can be seen in the brightest part of the Milky Way in the direction of the centre of the galaxy. The constellation offers a richer display of star fields, cluster and nebulas than any other constellation. The diffuse nebula M8, the Lagoon Nebula, M20, the Trifid Nebula and M17 the Omega or Horseshoe all lie within this constellation. Sagittarius (the Archer), is drawn in the form of a centaur. The half-human and half-animal composition of the centaur has led many writers to treat them as liminal beings, caught between the two natures, embodied in contrasted myths, and as the embodiment of untamed nature. The most common theory holds that the idea of centaurs came from the first reaction of a non-riding culture, as in the Minoan Aegian world, to nomads who were mounted on horses.

In the middle of Sagittarius’ horse body on the B3254 a signboard points to the Racehorse Inn in North Hill, a free house offering local homemade quality food and local real ales. The point of the centaur’s arrow lies on Example Cross, the hand holding the longbow is on Longdon’s Cross, The centaur’s tail lies on Coad’s Green and its feet lie on Berrowbridge.

While on older star maps Sagittarius is represented as a centaur, on modern maps of the southern hemisphere it is usually represented by a drawing of the Teapot. Steam appears to rise from the spout, thanks to a star cloud.

Multimedia artist Nigel Ayers, will perform a live psycho-acoustic set to accompany his new work 'Compost' – a forty minute digital animation that visually isolates biotic elements of a compost heap and subjects them to crypto-zoological distortion.
Posted by --((()))--- at 06:59 1 comment:

No animals were harmed in the making of this feature.