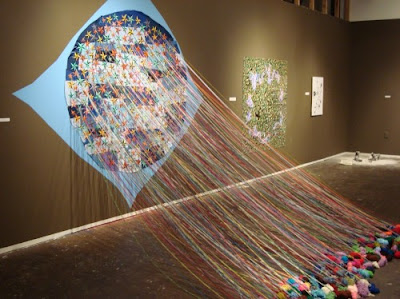 There it is, the Bodmin Moor Zodiac, on the wall in the background. In the foreground is Brian Hitselberger, Constancy at
Crop Circles, Cosmograms, Psychogeographies at Eyedrum gallery
Nov 20th, 2008
Atlanta Georgia, USA. There are 20 artists involved and the catalogue is sponsored by the Andy Warhol Foundation. The photo is from
http://burnaway.org/2008/11/crop-circles-cosmograms-psychogeographies-at-eyedrum/
Posted by --((()))--- at 11:17 No comments:

Another of my art cornwall reviews:

Heimo Zobernig and the Tate Collection

From 4th October 2008 to 11th January 2009, the Austrian artist Heimo Zobernig has been given the entire exhibition space of Tate St Ives, to install his own work alongside other more familiar art works from the Tate’s collections. The exhibition uses many of the reductionist elements of style that were significant features in the modernist painting and sculpture of around thirty years ago. It makes use of the Tate’s collections of 20th century modernist art, including some locally-produced pieces, locating and embedding Zobernig’s work within an established canon. Zobernig has also made some changes to the interior design of the gallery which are described as “architectural interventions”.

The walls of downstairs antechamber with the Patrick Heron stained glass window are hung with Trevira Television TS chroma-key green material. This industrially-produced fabric is a signature theme in Zobernig’s work. It is of the type produced for special effects in film and television, where a neutral colour can be “keyed-out” and replaced with a backdrop of different footage. When used with live actors, the neutral colour has to be one that is absent from the skin tones, hair or clothing of the foreground subjects. When seen removed from a film or TV studio, the fabric appears extraordinarily artificial and unnatural. Against the normal white walls of this room, the Heron glass usually gives the reassuring air of abstract patterns of nature. Now it looks somehow alien and disturbing.

In Gallery One, which usually contains a collection of St Ives modernists, there is a display of sculptures by Zobernig (above right). They are all minimalist in form and use the everyday materials that are available at any DIY store. They are all of average human scale and appear to be made by someone of average DIY skills.

There is a column made from twenty-seven cardboard tubes from the insides of toilet rolls, about as tall as an average person can reach. On a plinth made from an art-packing case stands a complicated knot construction, also made from toilet-roll tubes. There’s a piece of plain foam rubber lying on the floor, painted black about the same size and shape as a single bed mattress. There’s a wall mirror that has been broken. There’s an ordinary piece of particle-board painted mostly white casually propped up against the wall. There's a rectangular plinth-like construction painted with back gloss paint and covered in white feathers.

These objects all refer to minimal art of the 1960s, where art was reduced to surface and form; base elements stripped of symbolism, narrative content or the presence of the artist's hand. Despite its secular pretensions, minimal art always seemed to have a mystical side to its ambient presence: a meditative and neo-platonic purity of form, and human proportion, influenced by Japanese Zen Buddhism. It is this hidden ideological framework, which implies some kind of natural order in art, that Zobernig seems to be trying to undermine. Zobernig's pieces refer to the process of art-making, introducing a theatrical narrative which shows traces of the artist's physical presence in these handmade, flimsy objects.

In the other other galleries Zobernig shows a large number of sculptures, paintings from the Tate's national collection. As well as many pieces of primarily visual art, it includes a couple of iconic conceptual art pieces. In one glass case there is a can of Piero Manzoni's Artist's Shit (1961) Like Duchamp's readymades, Artist's shit questions the meaning of art as both cultural and consumer objects by inviting the viewer to confront a system that venerates cans of shit as works of art. In another glass case is one of Marcel Duchamp's Fountains from 1964. This is not the original 1917 readymade urinal purchased from a New York plumbers' supply company, but one of a limited edition of replicas manufactured from glazed earthenware painted to resemble the original porcelain and sold to a small number of prestigious art galleries.

In the same space, Zobernig has erected a large red Chroma-key curtain (above right) which partially obscures the large window of the gallery with its panoramic view over Porthmeor Bay, emphasising the artificiality of the art gallery.

Round the corner in The Apse, a large plain white lozenge-shaped grid-painting is set into an alcove in the wall. It looks unfinished, the strips of masking tape used to define the hard-edged painted areas have been left in place. Then in Gallery 3, a room full of more grid painting, this time using multicoloured squares. The paintings are reminiscent of Mondrian, but use a 1960s style masking tape/ acrylic paint technique rather than oil paint. The room also features an empty pair of Ikea bookshelves, arranged sideways so that you can see their MDF backs.

Gallery 3 has all walls covered with paintings from the Tate’s collections from the past 300 years (above left). You are forced to stand on Carl Andre’s 144 Magnesium Square 1984 floor piece to view paintings displayed in the crowded manner of a Victorian salon. In the centre of the room is a TV monitor showing a video of the artist wearing a long blonde wig, swaggering across a meadow.

Into the last room, all the walls are covered in garish Green Chroma Key fabric (below right). This gallery features a number of large figurative paintings from the Tate’s collection, alongside another couple of abstract paintings by Zobernig. In the centre of it all stands a marble sculpture by Barbara Hepworth, Pierced Form 1963-4, a blob-shaped piece of marble with a hole in it. Stones with holes in them feature heavily in prehistoric archaeological remains throughout Cornwall, perhaps Hepworth was trying to create something evocative of these mysterious features of the local landscape. In another context, Pierced Form could be a Hole to See the Sky Through (coincidently Yoko Ono made a piece by that title in 1964) but after seeing the Duchamp urinal and Zobernig’s toilet rolls, this sculpture now suggests the cover of a latrine.

Zobernig's show presents a particular view of art history as a process of reduction, surrogacy and artifice. His work seems to be about revealing the staging of art. Particularly here in the Tate, art is carefully guarded and treated respectfully: you are not encouraged to touch, and forms of interaction such as taking photographs are prohibited.

His work is all to do with the peripherals of art, the interior design of art galleries and the theatrical staging of emptiness, and it looks flimsy in comparison to the work he has selected to contextualise it.

His pieces are almost always untitled, referring to little but their context as pieces of art in an art gallery. Through Heimo Zobernig’s curation, Tate St Ives is reduced from a pious modernist space to the negative space of an existential void.

"Daniel Gumb was born in the Tamar Valley April 1703 and moved up onto the moor to be where his work was. He was a stone cutter and as well as cutting stone for building purposes he also cut gravestones (some of which can be found in local churchyards).
What we see now of his home is only a small part, it was origanally sited onb the south facing slope of Stowes Hill, what is now Cheesewring Quarry. The large slab roof was originaly 30ft by 10 ft and Daniel tunneled under it putting other slabs in to support the weight untill he had three rooms.
In this primitive house he brought up at least 9 children, it is thought that he had 13 but some died early. The date carved on the stone beside the house "D GUMB 1735 is said to be the date of his third marrige and was part of the door post for the house.
Sitting on the roof of his house Gumb studied the stars by night and solved mathematical problems by day. The carving of Euclids theorum on the roof can also be found on other slabs of granite east of the old railway line into the quarry.
When the Cheesewring quarry was started in the mid 1800s the home was broken up, Gumb had died in 1773 and many of his offspring had emigrated to the Americas. What remains now is only a small part, possibly placed in amongst the finger dumps of the quarry as a shelter to use during blasting.
It is best found by walking from the Hurlers towards the Cheesewring, when you come to the track that cuts across you look for a green path heading of into the piles of stone. The cave is at the head of the path.
Please treat it with care and do not climb onto the roof."