Perhaps THE quintessential audiovisual statements of the post-industrial music scene. Provocative in content, prescient in style, these medium-format videos captured the subversive interests and activities of the pioneering sound art project against a contextual backdrop of the UK between 1981 and 1984; a time rife with mass unemployment, civil unrest, media hysteria, political indifference, terrorism and war overseas. Burroughsian cut-ups reveal subliminal imagery hidden in exploitative mainstream broadcasting; shocking images of real-life violence against living beings are critically employed to expose our complacency in everyday cruelty; the thunderous soundscapes and ritual performances of the Nocturnal Emissions awaken the viewer's senses to our undermining culture controlled by fear and repression...

Rarely viewed since their initial home video releases and screenings at the Tate and ICA in the UK as a result of the 1984 Video Recordings Act, both videos remains impressive today as early influential examples of the extended music video and key moments of the British independent video art movement. Countless artists and broadcasters have emulated or outright stolen the ambitions, aesthetics and techniques used in the videos of The Nocturnal Emissions, either directly or through watered-down copies - few however can match the tremendous power of the original works, long overdue public and critical reassessment in these increasingly pertinent times.

Free entry with small donations welcomed. Doors open at 7:30. A short talk and introduction by the organiser will precede the first video at 8pm - second video will be shown after 9pm. Please be aware that these videos contains flashing images and some footage that may disturb those of a sensitive disposition.

Special thanks to Nigel Ayers/Earthly Delights and Piitu Lintunen for making this event possible.

*Wharf Chambers Co-operative Club is a members’ club, and you need to be a member, or a guest of a member, in order to attend. To join, please visit wharfchambers.org. Membership costs £1 and requires a minimum of 48 hours to take effect.* 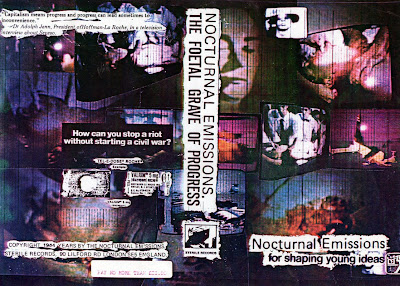