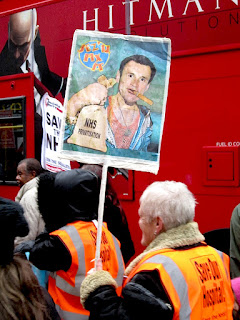 Save Lewisham A&E: Jez'll fix it

On Saturday November 24, 2012, despite the rain, around 10,000 protestors marched through Lewisham, in south east London, to a rally in Ladywell Fields, to protest about the proposals to close Lewisham Hospital's A&E Department, and send emergencies to Queen Elizabeth Hospital in Woolwich, to downgrade maternity services, and to sell off over half the hospital's buildings. If the proposals go ahead, there will be just one A&E Department for the 750,000 people in three London boroughs -- Lewisham, Greenwich and Bexley.
This placard is aimed at Jeremy Hunt, the disgraced culture secretary who, despite his corrupt dealings with Rupert Murdoch, was nevertheless given the job of health secretary in September, replacing Andrew Lansley. I find it ironic that, behind the Jimmy Savilled image of Jeremy Hunt, is an advert on a bus for something called "Hitman."
The proposals were published on October 29, 2012 by Matthew Kershaw, an NHS special administrator appointed by ex-health secretary Andrew Lansley to deal with the financial problems of another NHS trust in south east London that is totally unconnected to Lewisham NHS Trust, and the insultingly short consultation period ends on December 13, 2012.
Campaigners -- myself included -- are demanding that the plans be scrapped, and that Lewisham Hospital be allowed to continue providing a comprehensive service to the 250,000 inhabitants of the borough, whose health needs are more important than cuts designed solely to save money.
For further information, see: www.savelewishamhospital.com/
Also see: www.andyworthington.co.uk/2012/11/03/save-lewisham-ae-as-...
www.andyworthington.co.uk/2012/11/09/lewisham-residents-r...
www.andyworthington.co.uk/2012/11/21/save-lewisham-hospit...
For more on Andy Worthington, see: www.andyworthington.co.uk/


Cut & pasted from Andy Worthington's Flickr page. The placard image will be available for free download from a more permanent source shortly.. 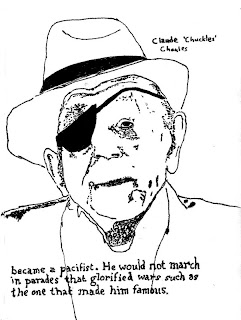 Claude Choules was not only the last surviving combat veteran of the First World War, but also the final person alive who saw active service in both world wars.

He became a pacifist and would not march in parades that glorified wars such as the one that made him famous.