J Milo Taylor is a London-based musician, artist, academic and writer whose interests include site-responsive installation, interactive robotics, sound art, multimedia environments, improvisation and performance. His work has been shown internationally and he maintains a commitment to interpersonal, intercultural and intermedial exchange as productive of original and context-specific creative outcomes.

His PhD project "ImMApp: An Immersive Database of Sound Art" involves a critical mapping of historical and contemporary sound art.

Exterminator is an electronic sound object made by Nigel Ayers, it contains a three step sequencer which activates a sound chip found in a Dr Who Dalek Easter Egg.

The Daleks were created by writer Terry Nation and designed by BBC designer Raymond Cusick. They were introduced in December 1963 in the second Doctor Who serial.They became an immediate hit with viewers, featuring in many subsequent serials and two 1960s motion pictures. They have become synonymous with Doctor Who, and their behaviour and catchphrases are part of British popular culture. "Hiding behind the sofa whenever the Daleks appear" has been cited as an essential element of British cultural identity, and in a 2008 survey, 9 out of 10 British children were able to identify a Dalek correctly.

The word "Dalek" has entered the Oxford English Dictionary and other major dictionaries; the Collins Dictionary defines it rather broadly as "any of a set of fictional robot-like creations that are aggressive, mobile, and produce rasping staccato speech". Terry Nation once said in an interview he got the idea for the name from the spine of an enyclopaedia, the volume covered DAL-LEK, although no such book has ever been found and Nation later admitted he had made this story up. It is also a trademark, having first been registered by the BBC in 1964 to protect its lucrative range of Dalek merchandise.

The term is sometimes used metaphorically to describe people, usually figures of authority, who act like robots unable to break from their programming. John Birt, the Director-General of the BBC from 1992 to 2000, was publicly called a "croak-voiced Dalek" by playwright Dennis Potter in the MacTaggart Lecture at the 1993 Edinburgh Television Festival.

The staccato delivery, harsh tone and rising inflection of the Dalek voice were initially developed by voice actors Peter Hawkins and David Graham, who would vary the pitch and speed of the lines according to the emotion needed. Their voices were further processed electronically by Brian Hodgson at the BBC Radiophonic Workshop. Although the exact sound-processing devices used have varied, the original 1963 effect used EQ to boost the mid-range of the actor's voice, then subjected it to ring modulation with a 30 Hz sine wave. The distinctive harsh grating vocal timbre this produced has remained the pattern for all Dalek voices since (with the exception of those in the 1985 serial Revelation of the Daleks, for which director Graeme Harper deliberately used less distortion).

Since 2005, the Dalek voice in the television series has been provided by Nicholas Briggs, speaking into a microphone connected to a voice modulator.In a 2006 BBC Radio interview, Briggs said that when the BBC asked him to do the voice for the new television series, they instructed him to bring his own analogue ring modulator that he had used in the audio plays. The BBC's sound department had changed to a digital platform and could not adequately create the distinctive Dalek sound with their modern equipment. Briggs went as far as to bring the voice modulator to the actor's readings of the scripts. He has used his modulator also for voicing the Cybermen in the 2006 series.

Easter eggs are specially decorated eggs given to celebrate the Easter holiday or springtime.

The oldest tradition is to use dyed or painted chicken eggs, but a modern custom is to substitute chocolate eggs, or plastic eggs filled with confectionery such as jelly beans. These eggs are often hidden, allegedly by the Easter Bunny, for children to find on Easter morning. Otherwise, they are generally put in a basket filled with real or artificial straw to resemble a bird's nest.

The egg is widely used as a symbol of the start of new life, just as new life emerges from an egg when the chick hatches out.

The ancient Persians painted eggs for Nowrooz, their New Year celebration, which falls on the Spring equinox. The Nawrooz tradition has existed for at least 2,500 years. The decorated eggs are one of the core items to be placed on the Haft Seen, the Persian New Year display. The sculptures on the walls of Persepolis show people carrying eggs for Nowrooz to the king.

At the Jewish Passover Seder, a hard-boiled egg dipped in salt water symbolizes the festival sacrifice offered at the Temple in Jerusalem.

The pre-Christian Saxons had a spring goddess called Eostre, whose feast was held on the Vernal Equinox, around 21 March. Her animal was the spring hare. Some believe that Ēostre was associated with eggs and hares, and the rebirth of the land in spring was symbolised by the egg. Ēostre is known from the writings of Bede Venerabilis, a seventh-century Benedictine monk. Bede describes the pagan worship of Ēostre among the Anglo-Saxons as having died out before he wrote about it. Bede's De temporum ratione attributes her name to the festival, but does not mention eggs at all.

Other theories such as Jakob Grimm’s in the 18th Century believe in a pagan connection to Easter eggs via a putatively Germanic goddess called Ostara.

The English name for the festival of Easter derives from the Germanic word Eostre. It is only in Germanic languages that a derivation of Eostre marks the holiday. Most European languages use a term derived from the Hebrew pasch meaning Passover. In Spanish, for example, it is Pascua; in French, Pâques; in Dutch, Pasen; in Greek, Russian and the languages of most Eastern Orthodox countries: Pascha. In Middle English, the word was pasche, which is preserved in modern dialect words. Some languages use a term meaning Resurrection, such as Serbian Uskrs.

Pope Gregory the Great ordered his missionaries to use old religious sites and festivals, and absorb them into Christian rituals where possible. The Christian celebration of the Resurrection of Christ was ideally suited to be merged with the Pagan feast of Eostre, and many of the traditions were adopted into the Christian festivities.


A virtual Easter egg is an intentional hidden message, in-joke or feature in an object such as a movie, book, CD, DVD, computer program, web page or video game. The term draws a parallel with the custom of the Easter egg hunt observed in many Western nations, but actually is derived by the practice of the last Russian imperial family's tradition of giving elaborately jeweled egg-shaped creations by Fabergé which usually contained hidden gifts themselves.

This practice is similar in some respects to hidden signature motifs such as Diego Rivera including himself in his murals, Alfred Hitchcock's legendary cameo appearances, and various "Hidden Mickeys" that can be found throughout Disneyland. An early example of these kind of "Easter eggs" is Al Hirschfeld's "Nina".

Exterminator! is a short story collection written by William S. Burroughs and first published in 1973 (some editions such as the 1974 paperback illustrated at right label the book a novel)."The Exterminator is another collection of stories Burroughs published in 1960 in collaboration with Brion Gysin. The titles refer to a job as in insect exterminator that Burroughs himself once held. Certain aspects of this story were used in the film version of Naked Lunch, with the main character William Lee (a portrayal of Burroughs) holding the same job at the film's beginning.

In the summer 2009 Exterminator will be played live as part of BZZZOING! Future Sounds & Music By Mail by the BAU Artkestra in a public performance in Viareggio, Italy and documented in the magazine Arte Postale! 100. Vittore Baroni writes: "2009 marks 100 years from the first Manifesto of Futurism. In 2009 will be published the 100th issue of Arte Postale!, a mail art magazine that I started thirty years ago, in October 1979. What puts in relation the two events is sound: Futurist Luigi Russolo’s Manifesto The Art of Noise is a milestone in the history of the experimental and weird sounds that I have been promoting since the early Seventies in my journalistic work for a long string of publications (Rockerilla, Velvet, Vinile, Urlo, Sonora, Underground, Rumore, etc.). Music was also the theme of the first three issues of Arte Postale!, so I return to the subject in this open invite to the hundredth issue."
Posted by --((()))--- at 06:55 1 comment: 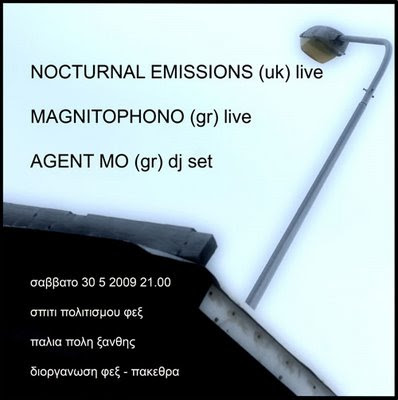 Here's the poster for the Nocturnal Emissions live show coming up on 30th May.

Under My Breath a CD from PBK I've just received this groovy CD from PBK which is playing on my sound system at this very moment.
The card cover has holes cut through to show the plain mirrored surface of the CD and inside the credits are written in mirror writing, which you can read on the CD surface.
This is what it looks like folded out:

It's a lovely bit of packaging. It took me two goes to get the CD the right way up in my machine, but when I did it was well worth it.

Here's what it says on PBK's web site:

"Very pleased to announce the long awaited release of "Under My Breath". "Under My Breath" is an abstract contemplation on post 9/11 paranoia in the U.S. Most of the album was created in 2004, during the height of the Bush administration's crackdown on human rights via the Patriot Act. The resulting album reveals a new vernacular for dark ambient isolationist music and is an important key to understanding PBK's ambitions in the world of sound. Seeking expression through the use of drones, natural or man-made acoustic sounds, digital glitching and turntable noise, the effect is one of surrealist juxtaposition, not jarring, but totally organic sounding, that can be listened to and savored in an intellectual way.