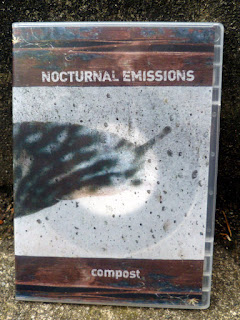 Nocturnal Emissions have been exploring the uncharted no man’s land between experimental sound performance, pop music and spoken word poetry for over 30 years. This live recording of Nocturnal Emissions’ show in November 2011 is proof of the fact that they’re still constantly evolving.  Deceptively bucolic ambient soundscapes give way to darker undercurrents in the bass. The 45- minute set is characterized by the subtle, almost imperceptible transformations, when a subdued pulsing that began as a flanged synthesizer chord suddenly turns out to be an actual beat that one could – well not dance, possibly, but tap one’s foot to.
“Compost” manages the feat that the music appears to be rather calm, never aggressive in any way, but leaves you with a mounting sense of tension that you cannot quite put your finger on.  As if there is something going on in darker corners of the music, your brain, or whatever – exciting to listen to.
“Compost” was recorded on 17 November, 2011 at De Ganze Backerei in Augsburg, Germany.
Organised by Attenuation Circuit , the concert featured  a performance by Nigel Ayers, the remaining founder member of Nocturnal Emissions. While most of Nocturnal Emissions’ former releases can be found on www.earthlydelights.co.uk, this album offers a glimpse of the current state of Nigel’s work as an electronic composer and solo performer.