Virgo, the virgin of Dobwalls 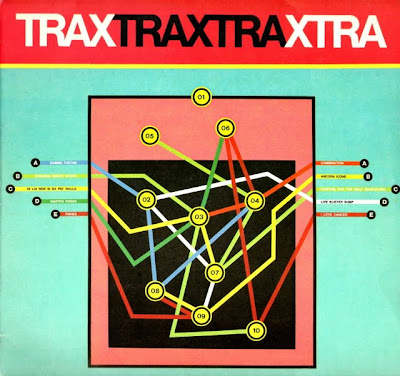 What did you find in your Easter Egg? If the surprise disappointed you, don't be upset, we offer you the free reprint curated by Radical Matters - Editions / Label of the historical album TRAX 0982 XTRA, ideated in 1982 by TRAX Unit 01 Piermario Ciani and composed at distance in a network of crossed exchanges by ten international musicians. As a bonus, you will find also a new experiment in "telecomposed" music, TRAX NEWXTRA 2011, coordinated by Gianluca Becuzzi with contributions from Nigel Ayers, Simon Balestrazzi, Fabio Orsi, Pietro Riparbelli and Rod Summers with Marie-Claire Krell.

Get it as a FREE DOWNLOAD, inclusive of cover images and bonus contents, here:
http://www.radicalmatters.com/asp/web_editions.asp

Or buy it as a COLLECTABLE LIMITED EDITION CD in special 7” sleeve with inserts (Euro 15,00) here:

Read below in this message the new introductory text and the list of tracks.

One year after the reprint as a free download and limited edition cd of the Trax 0983 Anthems project, Radical Matters reproposes with the same formula the first vinyl album produced by the atypical group/label TRAX in the distant year 1982. Following up a series of audiocassettes assembled with similar methodologies (Technodeath, Horrorbox, The Cop Killers, etc.), this pioneering album conceived and coordinated by Piermario Ciani synthesized brilliantly the idea of a “telematic” (and “modular”) music, composed and played through collaborations at distance, a concept explored before the age of Internet both by activists of the heterogeneous international “tape network” and by exponents of the “serious” electronic music scene, for example Pietro Grossi. As usual in this series of reprints started in 2007 with the double cd Rednight, Gianluca Becuzzi took care of the remastering from the original vinyl and added a new experiment in composition at distance (NewXtra). Nigel Ayers is the only participant of Xtra that has been involved again, creating thirty years later an ideal bridge between the two projects. For the occasion, I immersed myself once again in the archive of memories, digging up some images and documents of the period (the Grand Trax 0184 box, in particular, contained some graphics originally created for a deluxe edition of the Xtra lp, never completed), added here as an extra bonus and testimony of the multimedial disposition of the whirl of products and events that TRAX got under way between 1981 and 1987.

Whatever happened to the original TRAX Units? Some friends (to whom this reprint is dedicated) have sadly come to an untimely end, others are still active in areas connected to the artistical and musical scene, even with high-profile results (like Massimo Giacon in the fields of design, comics and contemporary art, or Martin Hall, who has become in Denmark a cult writer and composer), yet others are today professors of high repute or hold public offices in the cultural sector (Martina, Ciullini). If you appreciated the unique mixture of bizarre new wave, darting elettropop, ferocious industrial-noise and minimalist ambient of Xtra, let us know, we will feel more motivated to retrieve a few other rare relics. Once more, my warmest thanks go to all the authors involved and to Gianluca Becuzzi and Sandro Gronchi, without whose genuine enthusiasm this work would have never seen the light of day.

This record has not been produced, as usually, by one or more bands going into a recording studio with some compositions ready to be performed and later transferred onto vinyl.

This record is the final result of a process that did not take into account the musical, stylistic or compositive necessities of the various participants.

The Central Unit 01 contacted a selected number of individuals acting as Peripheral Units in a project of crossed interferences.

Some Peripheral Units prepared a base-track on tape that was forwarded by 01 to other Units for further elaboration.

The graphic scheme on the cover represents the development of the subsequent crossings: e.g. the track Gamma Thetan, that opens the TRAX side of the record, is the mix that results from a sound base produced by Unit 04, forwarded to Unit 08 who elaborated it and then forwarded it to 02, who after working on it returned the tape to 01, functioning as the data processing centre.

The project Trax 0982 Xtra proposes a workable model but does not exhaust its possibilities.

The series of ten modular compositions on this LP is just one among many possible combinations.

Trax 0982 Xtra presents audio pieces without a composer performed by inexistent ensembles that met only through a network of reproduction technologies and communication media.

The conceptual and operative scheme that I devised for Trax NewXtra, the new project of “modular composition” with the participation of six Units, four Italians and two from other countries, is a little different from the original one. Instead of adopting the scheme of crossed collaborations employed in 1982, I opted for a radial system. Acting as Central Unit, I provided the five Peripheral Units invited to the project (Ayers, Balestrazzi, Orsi, Riparbelli, Summers) with the same audio input, a series of dronic bases. I asked to each Unit to record a different track for each base I provided, not overmixed but as a separate track. In this way, once all the contributions had been collected, I was able to freely recombine all the different pieces of the audio puzzle into a single suite, titled Where Angels Can't Land. Of particular interest is the fact that, with this scheme, we gave form to a sort of “deaf orchestra” in which all the musicians played together without hearing each other. Only the coordinator/director of the orchestra or Central Unit (me) has been able to hear and (partially) control the global sound of the ensemble. In this sense, the radial structure of NewXtra works exactly in the opposite way compared to the old Xtra, where each Unit answered to the audio input provided by the preceding Unit in a chain of vertical stratifications. If you wish, NewXtra also represents a sort of semi-controlled application of the aleatory theories of John Cage.

In affectionate memory of Piermario, Caroline K and Enrico Piva.

All (c) remain to the authors. Edition designed and manufactured by RM-ED/L | SG 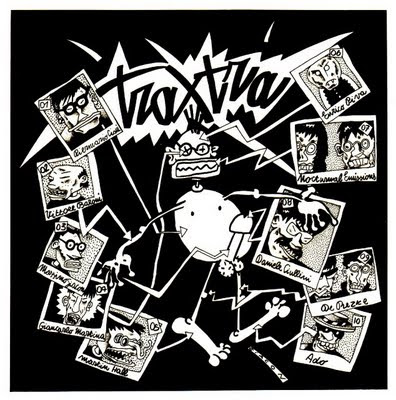 
An electronic device specially built to chant the first words of Space Cornish.
Work in progress.
Posted by --((()))--- at 12:30 No comments: