Between Great Care Hill and the lake, a flight of 34 concrete steps runs up the side of a clay tip. We descend Great Care Hill and ascend the steps up the lakeside clay tip. At the top of the tip stands a rectangular steel frame about 8 feet high. This has practical benefits: it frames what we record. It forms a painting of a landscape seen from a window in which the window is in the landscape. From one side we see Great Care Hill, from the other the white clay tips. This frame creates a doorway whose orientation establishes ancestral connections that link the industrial world of the clay tips with the cosmologies and mythologies of distant rock outcrops and cairns. Framing the external world in two directions, the physical and cultural meanings of the steel frame have a mythopoetic significance, reproducing permanent relationships between the living, the ancestors and the spirit world in a perspectival movement from hill to clay tips to pool of water. The frame orientation alludes to the significance of the clay tip as a whole in a cosmological model of the world. The frame acts as a visual metaphor made into solid steel and serving to elucidate aspects of cosmology and creation.

We find ourselves within the Glynn Valley Observatory, a permanent outdoor installation fusing archaic science with sophisticated modern perceptual theory. There are large circular pits lined with concrete. Built to overlook the artificial lake, this series of concrete wells reflect in daylight the major stars of the Gemini constellation. The wells vary in depth according to the Magnitude of each star. They incorporate the sky by reflection and deal with the phenomenological perception of nature's grander movements. The pools of water are the eyes of the earth, like the holy wells they represent the "negative" receptive spirit of the earth. Shallow and mysterious rows of stone emerge from the grass, oriented to the sunrise of the summer solstice. The builders of this site were not trying to reproduce an ancient temple; instead, they were making an environment that gained a dimension by referring to the past from their own point in history. This observatory connects human behaviour and perception to the annual round; it is more concerned with time as a concretised abstraction than as a vehicle for cosmic meaning. Based on a dialectical synthesis between historical consciousness and astronomical time, its real function is the symbolic negation of cumulative knowledge, historical and scientific, through the choice of a model that we recognise as prehistoric. The negation only confirms that which is negated. Circular stone pits, lined with concrete, are arranged to align with solstices, equinoxes and moonrise. A stonewalled medieval field with a small concrete structure stands at the far side.
The solar tunnel is a huge brickwork pipe facing over a central void and oriented to the summer and winter solstices. For about 10 days around the winter solstice, the sun rises in the section of the pipe facing southeast and can be seen through the northwest section. At and around the summer solstice, the sunrise and sunset align to the northeast-southwest and northwest-southeast pipes sections. Breaks in the pipe reflect the configurations of Althena, Castor A, Castor B, Mebsuta, Pollux, Mekbuda, Wasat, Tejat Posterior, and Tejat Prior. During the day, these constellations are contained in the interiors of the tunnels, through starlit points of light on the concave walls. During the night, moonlight or starlight penetrates the darkness within, sometimes in the form of moonlike crescents. The shapes vary constantly, depending on the angle of the light. Thus an inversion of sky takes place; stars are cast down to earth as spots of warmth in the cool tunnel. The solar tunnel both exposes and protects. Though its great cylinder is of the same brown colour and material of the site, it offers only abstracted points of identification with the human body. The openings of the tubes, however, offer a microcosmic parallel between the human eye in looking and looking out. The broken form of the tunnel is a macrocosmic parallel of the form of the earth itself; which cannot be precisely defined mathematically. The earth's shape is a flattened spheroid or oblate sphere, and the best representation of its shape is an ellipsoid of rotation. We can consider the tunnel as a fertility symbol, exposing the falseness of place and demanding the equal redistribution of phallic matter and imagery. It is said that if someone with a health problem crawled through the tunnel nine times, then they would be cured. Children suffering from rickets were passed naked through the tunnel three times. 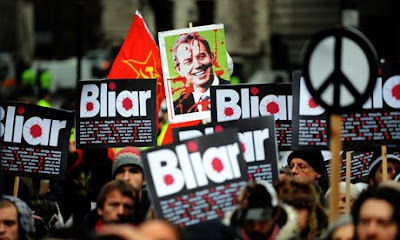 Tony Blair is at the Chilcot Equiry into the Iraq invasion again tomorrow.


http://www.guardian.co.uk/uk/2011/jan/12/tony-blair-chilcot-iraq-inquiry
To: President of the United Nations General Assembly and the UK Attorney General

To The President of The United Nations General Assembly, H.E. Father Miguel d’Escoto Brockmann, and The Attorney General of the United Kingdom, and their successors in office.

We, the citizens of the United Kingdom and other countries listed, wish to uphold The United Nations Charter, The 1998 Rome Statute of The International Criminal Court, The Hague and Geneva Conventions and the Rule of International Law, especially in respect of:-

1: 1949 Geneva Convention IV: Article 146
The High Contracting Parties undertake to enact any legislation necessary to provide effective penal sanctions for persons committing, or ordering to be committed, any of the grave breaches of the present Convention.

2: 1907 Hague Convention IV: Article 3
A belligerent party which violates the provisions of the said regulations shall, if the case demands, be liable to pay compensation. It shall be responsible for all the acts committed by persons forming part of its armed forces.

We therefore call on you to indict Anthony Charles Lynton Blair in his capacity as recent Prime Minister of the UK, so long as he is able to answer for his actions and however long it takes, in respect of our sample complaints relating to the 2003 Iraq War waged by the UK as ally to the United States of America.

We are concerned that without justice and respect for the rule of law, the future for us and our progeny in a lawless world is bleak, as revealed by recent US declarations about the use of torture and the events of December 2008 in Gaza show.


The following are our sample complaints relating to the Iraq War 2003-2009:

1: Deceit and conspiracy for war, and providing false news to incite passions for war, causing in the order of one million deaths, 4 million refugees, countless maimings and traumas.

3: Causing the breakdown of civil administration, with consequent lawlessness, especially looting, kidnapping, and violence, and consequent breakdown of womens’ rights, of religious freedom, and child and adult education.

4: Failing to maintain the medical needs of the populace.

5: Despoliation of the cultural heritage of the country.

6: Supporting an ally that employs ‘waterboarding’ and other tortures.

7: Seizing the assets of Iraq.

10: Marking bodies of prisoners with numbers, writing, faeces and other degrading treatment.

11: The use of cluster bombs and other indiscriminate weapons including white phosphorous on “shake and bake” missions.

12: Supporting indiscriminate rocket attacks from F16 fighter planes on women and children in Fallujah in Nov 2004

13: Supporting the shooting up of ambulances and medical personnel in Fallujah in Nov 2004

14: Supporting the expulsion of the entire population of Fallujah save for young men of military age, for a reprisal attack on that city in Nov 2004.


Download the album at:
http://nocturnalemissions.bandcamp.com
Nocturnal Emissions: "Bodmin Parkway (Disintegrated Public Transport mix)"
from "Nocturnal Emissions in Dub Volume One".
Posted by --((()))--- at 09:02 No comments: