Lusitania is an artist’ book work reproduced from documents first assembled in 1977. The found images and texts were printed on a variety of A4-size papers and mirrored foil using various multi-coloured screenprint, duplicating machine, photocopy and collage processes. The original documents were flood-damaged in 1994 and evidence of the resulting textures and coloration can be seen in this production.


Libra lies in the line connecting the bright stars Spica in Virgo and Antares in Scorpio. The Arabic names of the bright stars in Libra (the scales or balance) indicate that they formerly belonged to the scorpion, Zubenelgenubi means the southern claw and Zubenelschemali the the northern claw. Zebeneschimali is one of the only green stars which can be seen without a telescope. The sun entered Libra on the day of the autumn equinox; the name represents the equilibrium between day and night and between the seasons. The constellation has been known as the scales, a symbol of justice, balance and harmony, since the time of ancient Rome. It has been said that the Romans created Libra from the Scorpions claws, giving the scales to Astraea, the goddess of justice who we now know as Virgo. Their origin has also been traced to 2000 BC to ancient Babylon when this was the season of the weighing of souls and the judgement of the living and the dead. Mens souls are in the balance at the time when day and night are equal. Iota Libra is a multiple star with Component A being of 4.5 Magnitude and Component B being of 9.4 Magnitude. The eclipsing binary Delta Librae changes its brightness from 4.9 to 5.9 Magnitude within a 2.33 day cycle. It is about 300 light years away.
The scales are an analogue device that measures continuous information in an infinite number of possible values. The only limitation on resolution is the accuracy of the measuring device. By contrast, a digital system is one that uses discrete values, representing numbers or non-numeric symbols such as letters or icons, for input, processing, transmission, storage, or display. 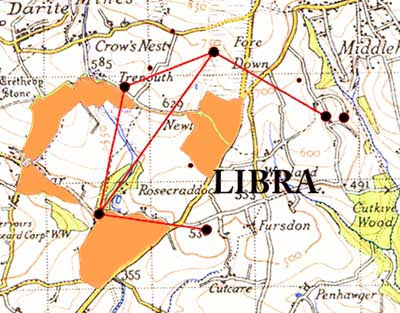 Initial Visualisation, prior to field work

The scales lie around Rosecraddock and close to the Wheal Tor Inn, the highest inn in Cornwall. The handle of the scales is formed by the road that runs from St Cleer through Tremar Coombe past Polwrath to Darite. From the church at Darite, through Crows Nest to Higher Trethake runs the cord that suspends the northern scale which is formed by a system of fields on Fore Down. Below the northern Scale lies Newton Farm, this reminds us of Newtons discovery of gravity as the force that works the scales. The process of weighing is suggested by hamlet immediately below the scale, known as Wayland. The cord which suspends the southern scale is formed by the road that runs from St Cleer Post Office across St Cleer Downs, past the water works. The southern scale itself is formed by a complex of fields enclosing Trenabe and Treneath. St Cleer is one of the larger Cornish parishes and has been inhabited for more than 6000 years. The village has two public houses, a post office and a general store. For thousands of years metal ores have been dug from the ground in this parish, first tin ores from open works and later copper ore from deep mines. In the nineteenth century 3000 men, women and children were employed in mining, a boom that led to the building of new villages like Darite and Minions. St Cleer Well, sanctified by St. Clarus, was said to cure insanity and blindness when a patient was ducked in the water.

Mission to Leo: the Lion of Goonzion


This is such a dense and potentially dangerous system that attempts to give a workable summary of it would achieve nothing worthwhile.. see the book THE BODMIN MOOR ZODIAC by Nigel Ayers (2007).
Posted by --((()))--- at 14:01 3 comments: 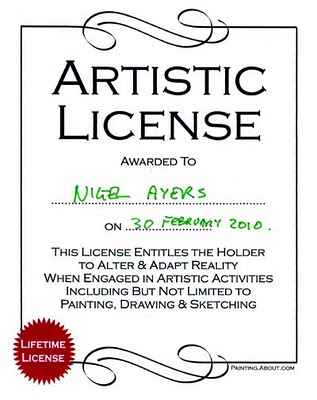 Since the 1950s, guerrilla sign ontologists, situationists and psychogeographers have delighted in using the power of the map to decode the urban landscape. They have explored Manchester using a map of Milan , wandered Newcastle guided by a map of the Berlin U-Bahn, and explored Hackney with a map of the moon. This re-use of maps may at first sight seem to be a simple economy measure, but these were in fact experiments aimed at creating spatial détournements, subverting the commodified image of the city. By the intentional misreading of city space, the city would “be experienced not as a thing at all, but as possibilities”. Our ritual walks are in contrast to the concept of the dérive meaning an aimless walk that follows the whim of the moment, sometimes translated as a drift.

French philosopher Guy Debord used the dérive idea to encourage readers to revisit the way they looked at urban spaces. Rather than being prisoners to their daily routines, living in a complex city but treading the same path every day, he urged people to follow their emotions and to look at urban situations in a radical new way. The notion was that most of our cities are so thoroughly unpleasant because they were designed in a way that either ignored their emotional impact on people, or indeed tried to control people through their very design. The basic premise of the dérive is for people to explore their environment without preconceptions, to understand their location, and therefore their existence. The flaw in Debord’s notion is that town and rural planners now use very sophisticated methods of emotional route-manipulation to move consumers through a series of consumables. The radical way to counter this manufactured routing is not to rely on emotion to guide us, but instead to devise more precise and radical methods of rambling. A better way to explore space is instead to adapt another of Debord’s concepts, that of the détournement, where an artist reuses elements of existing media to create a new work with a different meaning, often one opposed to the original. Détournement is similar to satirical parody, but often employs more direct reuse or mimicry of the original works rather than constructing a new work, which merely alludes strongly to the original. Another technique we suggest is to adapt the cut-up or fold-in technique to design walking routes. William Burroughs and Brion Gysin applied this to printed media and audio recordings in an effort to decode the material’s implicit content, hypothesising that such a technique could be used to discover the true meaning of a given text. Burroughs also suggested cut-ups may be effective as a form of divination saying, “When you cut into the present the future leaks out”. Burroughs also further developed the fold-in technique as a method for altering reality. Burroughs’ explanation was that everything that could be recorded could be edited. Later the CrimethInc Ex-Workers Collective developed behavioural cut-ups as a method of changing one’s life by performing activities which are created by cutting up two socially acceptable, routine behaviours and recombining them to form an new more amusing activity. The intention is that you perform a series of cut-ups for a long period until it becomes second nature and your behaviour is altered significantly. Détournements, fold-ins and cut-ups may all be contrasted with recuperation, in which originally subversive works and ideas are themselves appropriated by mainstream media.

In spatial détournement, a rambler reuses elements of a known territory to explore a new psychic space with a different meaning, often one beyond the boundaries of the “original”. In this case maps of outer space are folded into maps of terrestrial space. So our ritual walks are spatial détournements based on precise plans to overturn external temporal/spatial manipulation of our rambling. We have created our own walking system instead of being enslaved by another man’s. We do not advise others to follow these routes, but instead to create their own pathways of exploration. Looking at the patterns drawn on a landscape allows us to analyse their origins in the communication between human and animal life, technology and landscape. A detailed study gives us insight into how we remember our travels. Using GPS, a follow-up analysis of a created map provides a different perspective on how the Bodmin Moor Zodiac was organised. By looking at various data from above, below and within, moving through both time and space, we are able to make additional observations, analysis and conclusions regarding our rambles that might not be possible from ground level.