(in case you missed it)
The Virgin's Nipple 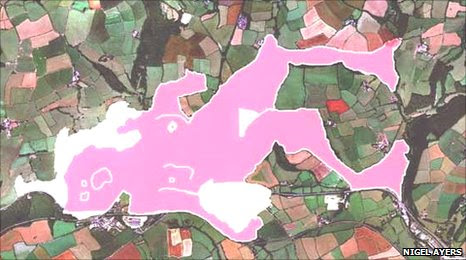 The Highways Agency is keeping very quiet about an alternative name for the big roundabout on the A38 Dobwalls bypass.

This may well be because the rather rude nickname, refers to part of an innocent woman's upper body.

Nigel created these signs on the moor and at the bottom of the circle is Virgo, the Virgin of Dobwall's.

The Highway's Agency then came along and built the bypass and the roundabout near Dobwalls.

Nigel says there is only one name the roundabout can really be given.

"What I had found was they had put the Twelvewoods roundabout right in the position of the right nipple of this goddess which I had sketched out on the landscape."

The Bodmin Moor Zodiac is the largest piece of land art ever constructed in the UK.

"There are lots of places around which have got some quite rude names, I mean look at Brown Willy, and these places have managed to stay with these names, so I don't know why they can't keep The Virgin's Nipple if it's going to catch on."

BBC Radio Cornwall's Michael Taylor reported from the roundabout on the A38 at Dobwalls.

The Highways Agency were given plenty of opportunity to comment, but BBC Radio Cornwall has heard nothing from them.

There now appears to be some confusion about which name the roundabout should take.

Up in Bristol it was a normal day in the office of Trafficlink which provides traffic information to the BBC.

That was until the police rang in to report an accident on the Twelvewoods roundabout on the A38 at Dobwalls.

Dan O'Hare from Trafficlink, needing to pinpoint the exact location of the accident, went onto the internet to do some research.

"I went onto the internet to do a quick search to find some more local information and the Twelvewoods roundabout came up with The Virgin's Nipple before it".

The use of the name Virgin's Nipple has also been used on the Highways Agency's very own radio station.

Local Councillor Peter Scott thinks the whole thing is hilarious: "As it stands I think it's quite appropriate, virgin's nipple, untouched by man, that's quite appropriate for the roundabout, which is quite baron in itself and never looks as though anyone has ever done anything to it."

Since the roundabout was constructed the Highways Agency has resisted calls from people in Dobwalls to put something on it to brighten it up a bit.

Suggestions included a large chunk of Cornish granite and a giant pasty but the agency said a very firm "no" because it doesn't want anything on here which might distract drivers.